Knowledge is power, or so it’s said. In the music industry, there’s a sort of consensus that it’s now what you know but who you know, and while knowing the right people for bagging the best gigs and high profile interviews can help, gaining the respect of readers is more about what you know. People who read reviews – and a lot of music fans dismiss reviews as pointless, and consider reviewers to be pond-life – expect reviewers to be knowledgeable about music. It’s not such an unreasonable expectation.

After all, you’d expect anyone in any other profession to be suitably qualified and / or experienced. Granted, music reviewing isn’t on a par with being a medic or lab technician, but if someone’s job – paid or otherwise – is to impart critical judgement, you want to believe they have a background that means they understand context. While there are plenty of bozos down the pub spouting shit about football who haven’t got the first clue, anyone who writes a sports column or appears on TV or radio as a pundit has to have more than a pretty face or good speaking voice.

Of course, what ‘qualifies’ someone to be a music critic is pretty vague, but ultimately it’s about the hours put in listening to music and learning about bands and styles – including the ones you have no interest in, including the ones you hate. I make no bones that I’m no fan of The Beatles, but have a rudimentary knowledge of their career path, and know what they sound like and so on.

If anything, I think my own personal knowledge is more extensive than most. I’m a cultural sponge, and still keep half an ear to the chart shit that flops out of the R1 playlist and another on the half-arsed emo cack Kerrang! pass off as rock so much of the time. Because I’m curious. Because I consider it my duty to stay informed. I can’t criticise something I’ve never heard. Which means I’ve tortured myself with Katy Perry and Miley fucking Cyrus in the name of music journalism.

But people have unreasonable expectations. They expect you, as a music writer, to have heard every album, ever. And to remember every song, by title. And in sequence, on every album. They’ll whinge that their favourite album of the year isn’t on your list. It might be great, but you haven’t heard it. The fact you’ve listened to and reviewed over 500 albums in the last 12 months counts for nothing if you haven’t heard and raved about X, Y or Z, which 6 Music and the NME loved. Meanwhile, people in the office who love generic mass-market indie bands and who think The Cribs are off the beaten track and worship Paul Weller, and scenesters who go out to be seen at all the local shows while they talk through every act will be amazed you haven’t heard of their favourite new local band who have only played three shows but are amazing and are already getting quite a buzz around them. That, or the fact Tom Robinson played them and I haven’t a clue who they are… They were on the front of the NME! Kerrang! Featured them last week! They played the local pub last month…. The fact I don’t know who they are, and certainly don’t know their every song makes me the most pointless asinine excuse for a music journalist on the planet. I don’t deserve all these CD and downloads or free gig passes. I should just give up and get back to watching Never Mind the Buzzcocks right now. 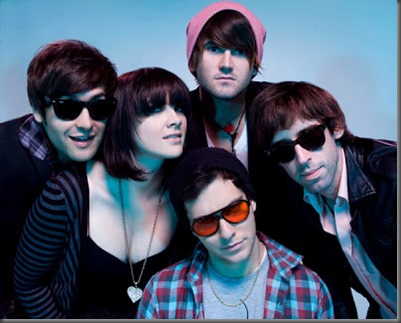 Some generic indie kids, yesterday. Your opinion as a music reviewer isn’t worth shit if you’ve not heard – and raved about – their friend’s self-released cassette, limited to six copies.