I recently lent a friend of mine, who works for a large financial organisation, a handful of CDs. When he returned them, there was an extra disc. it’s not unusual: he often lends me music. On this occasion, said disc was housed in a gaudy digipak decorated with segments of primary colours and it was still in its shrinkwrap. A gift? Or an accident? No. Entitled ‘A World of Discovery’, the album was a compilation that promised ‘a journey through the world of jazz, soul, funk and blues’, and it had been ‘specially compiled’ for another financial firm by Jazz FM. The bastard! He’d offloaded this piece of corporate crap on me, knowing full well how much I despise jazz, soul, funk and corporate crap because he didn’t want it. And who could blame him?

There’s something that makes this kind of corporate crap particularly abhorrent. Sure, I get the idea of a ‘global’ corporation doling out promotional gubbins that reflects and encapsulates the spirit of their ‘brand’ (or what they hope is the way their brand is perceived), and a compilation of music from around the globe says ‘multinational’, ‘global’ and ‘inclusive’, and music supposedly transcends all borders of nation (the fact I think this is utter bollocks is something for another time). But it’s about as credible an image of global culture and a celebration of diversity as a Benetton ad. United colours? One world together in music? One world under the cosh of capitalism pretending to be friendly would be closer to the mark. Does anyone actually buy this idea? Do the creators even think that this is the face of finance, or are they laughing up their expensive suit sleeves and steaming up their Rolex watches?

There’s another thing, too. I appreciate that some would accuse me of being narrow-minded musically at loathing jazz, soul and funk, and while I’d strongly disagree, the point is that I do loathe jazz, soul and funk and I’m certainly not alone or even in a minority. I daresay that in attempting to associate themselves with the artists concerned (I’m assuming the artists all gave their consent and were paid handsomely for selling their music and souls in such a way), the company in question think they’re being ‘hip’ and presenting a ‘cool’ image to potential clients and partners. But in producing and distributing a compilation such as this, they’re making a huge assumption regarding people’s musical tastes. Either that, or they’re hoping to dictate people’s musical tastes, in which case they should be sponsoring something on MTV or Radio 2. But Jazz FM? What does that say about the company, really?

Sidestepping that question and letting it serve as a rhetorical device, I’ll admit that I haven’t actually played the CD at this point. But then, do I really need to hear the ‘old school raw soul quality of Australia’s Electric Empire on their number ‘Baby Your Lovin’’, or ‘Let me Show Ya (Funkhaus Sessions)’ by Jazzanova of Germany?

Against my better judgement, I bung the disc in the player. It’s fucking hideous and sounbds exactly the the way you’d expect it to. A flicker of flamenco, a splash of salsa, with the horrible drum machine backing favoured by the Peruvian pan flute bands that play on the high streets. Laid-back Latina grooves smoothed to slick perfection transports the listener to a forgettable restaurant where the wallpaper, food and music all melted into one beige blur not even worthy of a smiley snap for Facebook. The ‘United Kingdom’, incidentally, is represented Escala, with their multinational smash, ‘Feeling Good’. Er, yes, quite. Escala, the ‘Britain’s Got Talent’ finalists covering Nina Simone. What in? Well, in keeping with the jazzy jizz of the rest of the material here, stringy sonic spunk.

In a time of recession, I do understand that companies need to find new promotional angles, and even when times are tight, it’s necessary to speculate to accumulate. But surely that’s all the more reason to ensure that promotion is effective – and cost effective. Even if the clowns who cooked up this cack-handed codswallop campaign genuinely believe that most people do like jazz, soul, funk and blues, what do they expect the recipients of these discs to do with them? Play them on an evening or at dinner parties to show how sophisticated they are, while subconsciously deciding they ought to do business with the company who gave them out? But as we’ve established, not everyone likes jazz, soul, funk and blues – so then what do you do it you’re the recipient of one of these dodgy discs? Landfill seems horribly wasteful. There’s the local charity shop, but who would buy it and would you want to be seen donating it? And while CDs make great coasters, it’s not everyone’s style. Which means the best option is to pass it on to your mate who happens to write music reviews and ranty blogs about pointless causes of irritation. 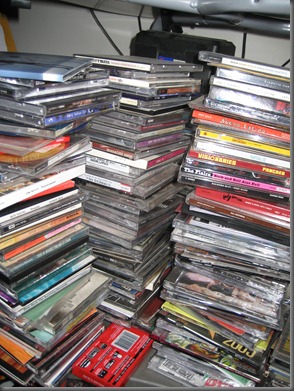 A substantial stack of crappy unwanted CDs, not unlike the one in my house.