Every once in a while, I publish not in limited quantities, but for limited periods. A gimmick to drive sales? Perhaps, but equally, it connects with my obsession with time, and specifically its brevity in terms of life lived.

In 2016, I marked the leap year by publishing a pamphlet containing two short stories – ‘Something Must Break’, which had previously only been available as an e-book on publication in 2014, and ‘Dream of the Flood,’ penned over the 2016 holidays in response to the floods which hit York that Christmas.

Christmas 2018 seemed an appropriate time to republish, partly as a commemoration where the latter story is concerned, and partly because the former is perhaps one of the bleakest, darkest pieces I’ve written to date.

I often say I switch off to write as a means of avoiding self-censorship, and on revisiting the alternating narrative of ‘Something Must Break’, a story of psychological disintegration and separation, parts of it felt quite shocking even to me.

As I continue to work on the follow-up to Retail Island, which should be out some time in 2019, I’m in a rather different headspace, although as we inch toward the final hours of 2018, it’s perhaps an appropriate time to reflect.

Republished – with alternative cover art – on Christmas Eve 2018, to be deleted at midnight on 31 December 2018, ‘Something Must Break / Dream of the Flood’ is available via the link which is the image blow. 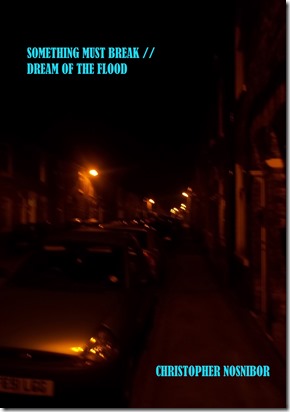 So, the 29 days of February are inching to a close.At midnight on the 29th, my 29 Days of February project will be terminated, and the pamphlet / ebook containing the short stories ‘Something Must Break’ and ‘Dream of the Flood’ will be deleted. There will be no republication, so the number of copies in circulation will be limited to the number of copies sold during the 29 days.

Here’s a brief excerpt from ‘Dream of the Flood’. Purchase links are at the bottom.

As the car alarms squealed and wailed outside under the cover of darkness and following earlier reports of power outages, the lack of contact with the outside world began to gnaw at me in ways I had not anticipated. I was ok, my home was safe, as was my immediate family, but my family and friends further afield had nothing to go by but the news media, and had no means of reaching us, nor I they.

I made my way out, for the second time that day, into the street. It was unusually quiet, although I had to remind myself that Christmas often brought a strange silence to the streets. The traffic was minimal, and I passed but a handful of pedestrians as I took my circuitous route to the river, rediscovering a mobile phone network on the way. It wasn’t until I drew near the approach to the river than I encountered any density of people: groups were hovering at the end of the road, and they had clearly made their way there with the intention of observing the floods, just as I had. Clusters of three or four, all wearing wellington boots, stood at the edge of, or even waded into, the water which had crept beyond the point at which the road ended and the fields began: the bollards, with their reflectors, were largely submerged, and the famed Millennium Bridge, opened in 2000, began some 30 metres away from the edge of the expanded river edge. 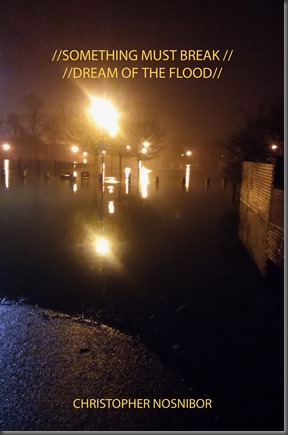 ‘Something Must Break’: A dissonant tale of mental fragmentation and duality.

‘Dream of the Flood’: A meditation on climate change and possibilities of the near future, of human interaction and solipsism.

Together, these two pieces represent Christopher Nosnibor’s more literary side as he continues to explore narrative forms and voices.