I’ve spent most of the last three years purpsefully avoiding publication. It may seem perverse, but there you have it: the idea behind the Rage Monologues was to work on an open-ended project which was about immediacy.

The pieces were penned to be performed in public, and not really to be read in private. The nature of the material and the performance fed into one another synergetically: I wanted to create visceral, raw material to be performed in the most uncompromising, uncomfortable style: each performance was different, with edits being made before each show, meaning the monologues were not fixed, but in constant development, and performed in a fashion which would have an impact. I wasn’t concerned about that impact being positive, and over time, I’ve lost any anxiety about being poorly received: I would rather people walk out in disgust than be impartial or disinterested,  or simply find myself amongst the infinite spoken worders whom audiences would likely consider adequate but forgettable.

Not publishing and keeping the monologues as something which existed only in the moment and in the ether was a deliberate act of rebellion: going offline and making the work available to only a limited audience was  intended to be subversive, a middle finger to globalisation, and ‘the process’: write, publish, tour, or similar. The fact the pieces weren’t published meant the only means by which they were aailable was at performances. A sense of exclusivity so often builds anticipation and can the the key to a cult reputation, and I took the monologues to some substantial audiences at respected – and packed – spoken word nights, wth some major highlights being in Leeds, Sheffield and Manchester.

The rock concert analogy is a fitting one: band shift more merchandise after a strong show: the punters have usually consumed booze and are ‘in the moment’. But ending a set and shuffling off with nothing to sell proved problematic, especially given that as an individual (and , as a writer, a relative unknown) with a full-time job and a young family, my touring actities were – and remain – limited to spoken word night slots in places I could reach, and return from, by train on an evening – and a sale or two afte a performance can go some way to mitigating travel costs, not being a writer who commands ‘guest speaker’ or ‘headline’ slots (and I like it that way, and find ‘guerilla’ appearancs to unsupectin crowds are generally more effective than spouting to a crowd already familiar with my work, which is no way for an author to grow a readership).

And so, while the primary objective of the project remains unchanged, I’m aware that making my work unvailable to practically the entire world is self-defeating. While I would love to perform at evety spkoen word night in every city around the globe, it’s not going to happen. And while going underground as an artistic statement is fine, and keeping things clandestine is cool, rendering one’s work inaccssible and unavilabe can be, to an extent, self-defeating. So this happened: a proper book and e-book, published by Clinicality Press – available at spoken word performances and globally for those who can’t attend live events in the north of England (click on the image to purchase). 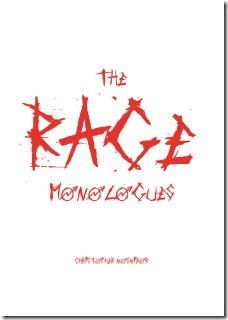 And if you’d like me to bring the rage to a spoken word night near you, then of course do get in touch…