Only just a few days into January and already the sales reports from the high street are beginning to filter through for the run-up to Christmas. It’s difficult to imagine that anyone will be surprised by the fact that broadly, sales have been rather poor and substantially weaker than hoped, and that as a percentage of retail sales, online transactions account for a larger proportion than ever before.

Sky News report, ‘There is one factor common to the trading statements from Next and John Lewis – an increase in online sales that has propped up the overall results.’

The on-line article continues, ‘In the case of Next, it’s [sic] Directory service recorded a 16% increase between 2010 and 2011 for like-for-like sales. Sky News has been told that online sales account for roughly 90% of this figure. With regards to John Lewis, online sales for the five weeks to December 31, 2011, were 27.9% up on last year.’

Apart from exemplifying the kind of statistically-dense reporting that’s likely to bamboozle the average reader and providing a practical demonstration in the kind of journalism that uses a proliferation of numbers in lieu of meaningful analysis, what we are supposed to extrapolate from this is that the figures speak for themselves. Of course, this is patently untrue, because the figures, bald and devoid of context are in themselves virtually meaningless. The scant analysis offered by the unnamed reporter does little to shed any real light on the implications of the figures when they ask ‘What can we learn from this? Well essentially that we, as shoppers, are inherently lazy and becoming increasingly more so,’ adding ‘There is nothing wrong with that. If we can shop without leaving our desk or home then we are choosing to do so.’ Really? There’s a lot wrong with being inherently lazy, on so many levels, but of more importance here is the fact that shopping from one’s desk (something many employers would surely disapprove of, and which could constitute misuse / abuse of company systems) or home does not necessarily equate to being lazy. I would contend that lethargy has nothing to do with it, and that the laziness of consumers is nothing in comparison to the laziness of the journalists proffering such poorly-considered evaluations of the ‘facts’.

For starters, the article fails to take into account the fundamental fact that high-street (or out of town) shopping – real-life shopping – is hell. Never mind, as was mentioned in the BBC’s TV report, that the opening hours of high-street retail outlets are both limited and limiting, and that on-line shopping affords the convenience of 24/7 open hours, which are handy for those who work sociable hours (I say this because those work work anti-social hours aren’t stuck in an office or other place of work between the hours 9am and 5pm, when shops are open, and if you’ve ever tried to do any serious shopping within the confines of a lunch hour Monday to Friday, you’ll appreciate that it’s not only nigh on impossible, but more hellish than Beelzebub’s oven).

Discounting the Sartrean hell that is other people momentarily, there’s the fact that comparing the prices different retailers charge for the same item is considerably more straightforward and less time-consuming on-line than on foot. And of course, time is money, supposedly. Undoubtedly, that time is the most precious commodity an individual can have is part and parcel of the hectic technology-driven lifestyles that facilitate both on-line shopping and global commerce. If workers do spent time at their desks shopping on-line, it could be that they’re time-wasting skivers, but could just as readily be because they’re too busy to take a proper lunch break in which to hit the shops, which have probably relocated to an out-of-town shopping precinct.

According to the Sky article, ‘The trick for retailers is how best to facilitate that and how they combine an online store with their high street shops whilst keeping both profitable.’ No kidding. By making your presence as a business prominent via the most channels available, with particular emphasis on those where the most customers are, then you’ll fare better than if you don’t. The adage ‘Location, Location, Location’ still has merit, and applies to the virtual world too. As for keeping outlets profitable, that’s surely how business works, period.

Sky’s report concludes with the observation that ‘Both Next and John Lewis know their customer base well and play to it with success’ (fine, except according to the figures, Next’s overall sales are only fractionally up, and its high street sales have dropped dramatically, a point that provided the focus of The Guardian’s reporting of the same information, with Zoe Wood writing, ‘Analysts estimated that like-for-like sales in Next stores fell more than 5% in the last two months of the year, resulting in a worse than expected 2.7% decline for the six months to 24 December. That weakness was offset by a strong performance at home shopping arm Directory, where sales jumped nearly 17%. Together the divisions delivered growth of 3.1% which was in line with guidance given to analysts in November’).

The reporter ends their piece by opining that ‘Retail is Darwinian, the survival of the fittest. Success and survival comes to those who change and adapt. The old adage is the true: the customer is always right.’ This is blatantly untrue, and blindly propagates the myth that markets are consumer driven. As I have bemoaned variously, I feel largely uncatered for as a consumer. It’s not even the obscure items, that I would expect having difficulty with, that present the biggest problems. If I want something unusual, there are niche stores – granted, usually on-line – that stock them. I’m talking about specific books, records, storage solutions, brand footwear at prices I’m willing to afford (£95 for a pair of DM Chelsea boots is obscene however you look at it) homebrewing equipment and other such items. But try finding something simple, like decent oven mitts, a ceiling-mounting light for the bathroom designed to work with a fitting that runs in conjunction with the wiring for an extractor fan, jam jars, etc., and you’ll probably struggle. I can’t be the only one seeking these items, and can therefore only conclude that others make do with whatever alternatives and close matches are readily available. How does this indicate a market tailored to the consumer?

Moreover, if I find myself making an increasing number of purchases on-line because I frequently return from town empty-handed, having been unable to find the specific item I was searching for, how is that an example of consumer lethargy? Again, by failing to cater for my needs, the high-street stores have failed their (potential) customers and driven them on-line. If retail is Darwinian, surely the survivors are the ones that stock the items that consumers actually want. After all, it’s only possible to convince people that they want what they get and that they don’t know what they want until they see it up to a point. If I need a new stylus for my turntable, it won’t do to tell me that vinyl’s outmoded and that I should get myself an iPod and docking station instead, and similarly, if the styli in stock aren’t compatible with my turntable, I won’t be buying one – or a new turntable for that matter, at least for as long as there are other stockists who carry compatible styli. It’s really not that hard.

High-street shopping is tiring and laborious. Some people love it and will spend days trailing round shops trying on shoes and clothes and all the rest. Yet even those than enjoy such shopping expeditions will often make their purchases on-line, not through lethargy but because of the price. No-one with half a brain is going to buy an item in one place they can purchase for a third less elsewhere, especially when they know it’s the item they want having already tried it on or out. On-line stores don’t have the overheads of physical stores: fact. They don’t have to pay out-front assistants, cleaners, heating, lighting, or, most significantly, rent on the floorspace. This is precisely why Amazon can undercut Waterstone’s and HMV so dramatically (and why HMV, with their Channel Islands based tax-loophole savvy on-line arm can undercut its own physical stores, a retail model also known as shooting oneself in the foot). Of course people are going to go and buy their goods on line for less. It’s simple economics.

Another piece of simple economics is that anything that isn’t growth is considered recession, but to expect endless growth is unrealistic. Sure, the world’s population may be continually expanding, but that doesn’t mean they all want to buy the same products. Certain markets have limited potential for expansion, even mainstream mass markets. Therefore, to declare ‘flat’ sales or lower than projected growth a complete disaster seems unreasonable. Yet many companies will lay off large numbers of their workforce in light of such ‘disappointing’ results, and blame the recession while contributing to it and exacerbating the problem further.

But perhaps the biggest major omission in these reports is that people aren’t spending because they simply don’t have the money. There’s a global financial crisis going on. The fact that the figures for Christmas 2011 correspond with those for 2008, only with the decreases in overall sales and the erring toward on-line sales more dramatic, reminds us that we’re still in a slump. The words ‘recession’ and ‘depression’ still hang over financial reports like a black cloud. Look at the most recent unemployment figures: they’re still on the up, not just in Britain, but in the US – and the US economy is the global economy.

Context counts, then, and against a backdrop of financial uncertainty, rising inflation, etc., etc., people are spending less money because they have less money. It’s interesting to note that these reports appear on the same day that homelessness charity Shelter made public the findings of a survey they had recently conducted, which revealed that one in seven Britons has turned to credit such as a payday loan or unauthorised overdraft to help cover their rent or mortgage in the last year. Surely this is all the evidence required to establish the reason behind reduced spending. I’ll say it again: people simply haven’t got the money. But then, perhaps they never did have the money. The difference now is that neither do the banks, and so they’re not lending it out. And if people can’t get credit, then they can’t spend the money they don’t have on things they don’t need. Better to spend the money they don’t have on the things they do need, like accommodation. It’s a slippery slope, of course, and where it ends is anyone’s guess. But then, that’s what economists do…. 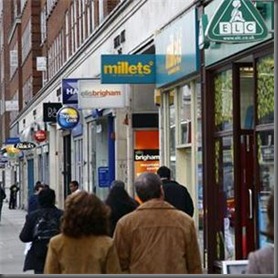 2 thoughts on “The Changing Face of Consumerism X: Down on the Street”