The Foo Fighters have become something of a recurring theme in my writing, for a number of reasons. I will confess that I did find their debut disappointing, although it’s only as time has passed and their career has progressed that my dislike of the band – Dave Grohl in particular – has really solidified. There was a time in 2005 when it was impossible to escape the strains – and I use the word intentionally and fully aware of all of its connotations – of ‘The Best of You’. Not having a digital radio at the time, I found myself often stuck with Radio 1, where Chris Moyles would play it relentlessly. Fine, he’s a commercial DJ and a slave to the playlist almost as much as to his appetite and ego, which are of comparable size. But at the time, Zane Lowe represented just about the best – by which I suppose I mean the only – real conduit to new alternative music. However, it was around this time that the playlists of the supposedly alternative Lowe, who was growing increasingly irritating in his excessively exuberant links and evermore sycophantic interviews with artists, began to overlap with the mainstream daytime shows to a considerable extent. Were alternative bands taking over the mainstream? No, the alternative being represented was becoming increasingly commercial and narrow in scope.

The Foo Fighters – a major force in the charts, especially following ‘The Best of You’ and the attendant album, In Your Honour – were not an alternative act. In fact, the crime was worse than that: they were the acceptable face of rock, the ‘rock’ band it was ok for people who don’t like rock to like. The very worst type of corporate rock is surely the rock the suit digs and references when trying to make like they’re hip. In my own experience, I’ve heard it said on more than one occasion that ‘The Foos Rock’. The line always seems to emit from the mouths of people who wouldn’t know rock if it hit them round the head and knocked them unconscious. Arguably, it’s impossible for any band which has songs converted to ringtones to be alternative, and certainly, if an act’s getting played every morning for a month on Chris Moyles’ breakfast show, it ain’t alternative. While I’ve never actually heard a Foo Fighters ringtone, I’m sure they exist and are favoured by the least ‘rock’ people you’re likely to meet. 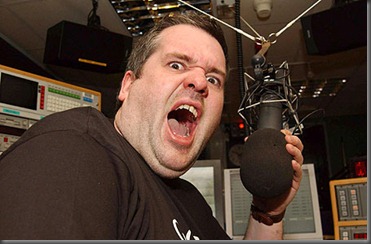 Chris Moyles: the saviour of Radio 1 or just an egotistical fat cunt who loves the sound of his own voice?

Yet the Foo Fighters retained credibility with the true rock crowd because of Grohl’s credentials in terms of his previous output. Now, as a drummer, I have to confess respect, even admiration, and his contribution to the recordings of other bands is also noteworthy: Killing Joke’s eponymous 2003 album would not have been half the album it was without his powerhouse percussion, for example.

Anyway, while some authors have imbued characters they intend to portray negatively with, for example, physical defects or deformities as a reflection of their defective personalities or deformed morality, I bestow mine with questionable musical tastes – at least as far as I’m concerned. Ben’s liking of the Foo Fighters correspond with his conflicting nature, namely the conformist battling with his rebellious streak. In Ben’s case, it’s a more complex issue than his inner rebel struggling to find an outlet against the conformist he’s become in order to fulfil the function he has assumed. Moreover, he’s a conformist at heart who has a fear of anything that disrupts the comfort of conformity; any rebellion he exhibits is as artificial as the happiness he presents to the outside world, because he knows that a dash of rebellion, of non-conformity, is cool. Fearful of going too far, and not really having a taste for anything too far beyond the ordinary, The Foo Fighters are emblematic of ‘safe’ rebellion, the musical equivalent of, say, a henna tattoo.