As someone who has a keen interest in visuals, I often feel frustrated by the limitations of my abilities as a photographer, and of my camera. As a music reviewer, I often like to take pictures of the bands I see, and while my images are often of a reasonable standard, I will confess to feeling somewhat embarrassed when standing in the front row with my £49 Fuji Finepix JZ100. The whole car / camera lens / penis extension analogy is entirely applicable, and the sneers at my diminutive kit aren’t purely paranoia.

Not everyone’s toting a £2,000 digital SLR with a telephoto they can rest between the monitors while lounging by the sound desk, of course. The vast majority of people snap away on their smartphones, which often pack cameras with insane specs. The Sony Xperia Z1 comes with a 27.1MP camera, and the Nokia Lumia 1020 not only has 41MP is advertised as a camera first and a smartphone second. And with a Xenon flash and Zeiss optics, we’re talking pro photography standard gear here. And again, these posers look down on my paltry 14MP cam with its mere 8x optical zoom and wonder why the fuck I’m not using flash. Granted, I do end up with more dark blurry shots than they do, but when I time a shot right, I do succeed in capturing the lighting as it is on stage, rather than a washed-out shot that illuminates the blank wall at the back of the stage. And I do think I have a reasonable eye for composition, something that the best camera in the world and all the Instagramming under the sun won’t give you.

But there’s something more than this that renders the current obsession with expensive, high-spec photography equipment utterly pointless, and that’s how we (that’s ‘we’ as in the techno-savvy mainstream populace) view pictures. There’s no question that we live in a visual age. As the Internet has evolved (back in the mid 90s content was essentially text-based) so the importance of visuals has come to the fore. We expect and demand good graphics, and lots of them – to the extent now that many gig reviews consist only of images, with no text whatsoever, and every fractional corner of our lives are documented in images. Millions of images. Over and over. A hundred pictures of every night out, several dozen snaps of ever day trip or walk in the park, every meal and drink meticulously recorded for posterity as evidence of the full and fulfilling lives everyone leads. People are obsessed with providing proof that their life is being not only lived to the full and jam-packed with fun and amazing experiences, but a reminder that they have the best device on which to capture all of these fantastic experiences in a quality that’s even more intensely real than reality itself.

Arguably, people are no longer really living ‘in the moment’ because they’re observing every moment through a display screen. Looking back at the images and video clips doesn’t recreate the moment, or facilitate a re-run of a pre-lived experience: it becomes the experience in itself, a second-hand version, a document that represents the moment never truly lived first-hand. Everyone’s a viewer, a recorder, a spectator. Where are the actual participants?

Above all, though, despite the fact screens on smart phones are larger than ever before and have higher resolution than at any time in the past, the fact remain that the bulk of images are posted to social networking sites or photo sharing sites, and viewed on smart phones or tablets. Real-life, shot in ultra-high-resolution, viewed on a screen 3” or 4” wide. What a waste. 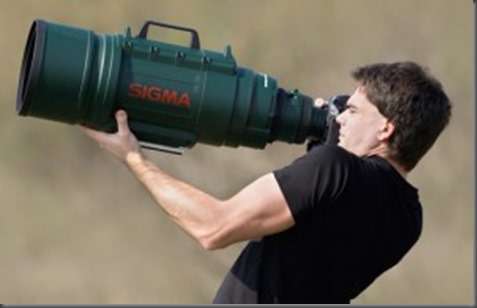 Fuck yeah! $32,000 well spent… check this awesome pic of my breakfast! That fried bread is so real-looking you could eat it off the screen!

And if you’re loving my work, there’s more of the same (only different) at Christophernosnibor.co.uk.