For those who think that working as a music reviewer is way cool and involves hanging with bands backstage and basking in free stuff and record company promo largesse, the average online music reviewer leads a very different existence. I’m not saying I’m representative of all or even most music reviewers, but as someone who’s been doing this thing for nigh on 20 years off and on, and has consistently turned in over 300 reviews a year since 2009, I do feel I’m at least qualified to report on my own experiences. Will this blog help aspiring reviewers? Probably not. Is it some kind of therapy session? I have no idea. It’s a blog. It is what it is.

When I started writing in earnest for Whisperin’ and Hollerin’ in November of 2008, I was thrilled to receive a Jiffy containing five or six CDs by artists I’d never heard of, and would never hear of again. I was actually off work with ‘flu when they landed, so I say, huddled in a blanket, streaming snot as I shivered and shook my way through a bunch of fairly bland albums, which I dutifully listened to a handful of times and did my best to give them a fair and honest but critically balanced and objective appraisal. It wasn’t easy, at least for all of them.

I started to receive offers of gigs to review in York and Leeds, too, my nominated / designated territory. Keen to get myself on the register, I took the first few that came up regardless. I wanted to prove myself, to get my name out, to show I was eager and willing, and able to critique anything. And so I did. I saw some ok bands, the majority of which I’ve since forgotten. I saw a fair few shit bands, too, but you gotta take the rough with the smooth, I figured.

Being a serious gig veteran (I started watching pub gigs and so on when I was 14 and saw my first big gig proper – The Mission at Sheffield City Hall – when I was 15) I wasn’t the sort to be swept away on the tide of excitement the inexperienced feel when presented with live music. I didn’t think ‘it’s live, therefore it’s amazing’ and was more than capable or retaining my critical faculties – and memory – even after a few pints.

Cut forward from 2008 to 2014 and I’d like to say the hard works paid off. In some respects it has, in that I now receive more free music than I can physically listen to, and manage to score many of the releases I’d have previously paid for for free. Similarly I can pick and choose the live shows I cover, and get to go and see bands I’d have historically paid for – or even missed because I couldn’t afford a tickets, although I still take punts, and I still review acts I’m either unfamiliar with or largely ambivalent to because I think covering them will help raise my profile.

I still don’t get paid for any of this and I still work the 9-5. Trying to do up a house and be a half-decent parent to a 3 year old with a full-time job is enough for most people. They’re pussies, or otherwise lacking ambition.

Tomorrow, I’ll be hauling myself from York to Leeds and out to the Brudenell Social Club after work to cover Black Bananas. I thought their most recent album was middling, a 6/10 but figure they might be entertaining as a live act. I’ll be going on my own, despite being offered a +1. Because I’m popular like that. I won’t hang out with the band. I’ll get back in around 2am and will be up less than five hours later for work. Because. Cool huh? 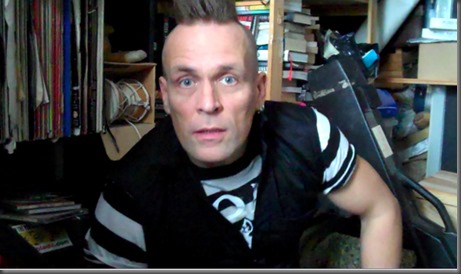