It’s fair to say that I’m not really big on sport, either as a participant or a spectator. While I used to be good at cross-country running in school, and do enjoy watching a spot of snooker and test cricket, even keeping an eye on England’s international football matches, other sports I frankly couldn’t care less about (and my running days are well behind me: now, I’m as unlikely to run a marathon as watch one on television). I also happen to find athletics particularly tedious, and as such, have always avoided the Olympics. There aren’t that many people I know who seem all that fussed either. However, bringing the Olympics to Britain – by which of course I mean London – seems to have turned half the nation into rabid fans.

And so it ,was that today, at certain points of the afternoon, half the streets in York were closed while the 8,000-mile national Olympic torch relay traversed the city. The day’s section of the relay concluded at the racecourse, where 20,000 people were expected to attend a (free) ticket-only event. As I made my way through the city centre around 4:30, sections of many streets were lined with metal barriers, with people clinging to them in eager anticipation, sometimes three rows deep. They still had another hour to wait, and as I made my way away from the city centre toward my home, the experience was akin to swimming against the tide as people flooded in the opposite direction from the one I was walking in.

A crowd of rabid Olympics fans clamour round a torch-bearer, somewhere in Britain recently

A friend of mine, who I’d chatted with on the bus into town, had looked slightly surprised by my lack of enthusiasm for the event. He was heading for the racecourse. He pointed out that it was a once in a lifetime opportunity to see the Olympic torch in his home city. On disembarking, we headed in opposite directions and I began to wonder, as I passed the TV and radio outside broadcast vans, the police cones, the police constables, the stewards and and PCSO and the gathering crowds, if by heading home and shunning the whole event I wasn’t perhaps missing out. Perhaps it wasn’t that they were all pathetic sheep, but genuinely enthusiastic and interested in the symbolism of the torch, the idea of a community and a nation united by sport. What if they were right, and I was wrong?

I arrived home and didn’t turn on the television, didn’t immediately flick to Sky News, BBC News or the BBC website for the streaming live torch action and scrolling real-time blog commentary, and didn’t immediately sign into Facebook. I didn’t need to: Mrs N’s Facebook feed was already beginning to fill with images of crowds taken from various angles, and reaffirmed my original belief. I had been right all along: what this ‘once in a lifetime opportunity to see the Olympic torch’ actually represented was just one of infinite opportunities to mill about and crush in with countless strangers all clamouring for a glimpse of something fleeting and ultimately inconsequential – in this instance, one of 8,000 gas-lit ‘torches’ that make up a seemingly endless build-up to a sporting event that takes place every four years that’s cost billions. And will be happening in London.

As with the jubilee celebrations, the idea that the whole nation is aflame with enthusiasm and national pride and is backing ‘Team GB’ and the Olympic build-up, as portrayed by the media is a myth. There may have been hundreds lining the streets in every town and city to see ‘the’ torch (which didn’t really happen for the Jubilee) and thousands heading to the racecourse for the evening event, but if anyone truly believes it was for any reason other than the chance to duck off work early, to say you were ‘there’ and prove it by posting photos on Facebook, or to appease the panic that they might have been missing out on something, then they’re even dafter than the other painted-faced flag-wearing bozos and I’ll happily eat the torch I’ve got tucked behind the sofa ready to flog on eBay at the weekend… 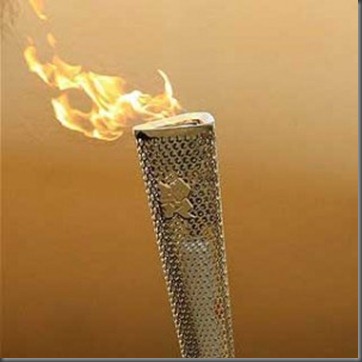 ‘The’ Olympic torch. Hand-crafted in ancient Greece and made of real Olympian metal. Yours for just £100,000.

And if you’re loving my work, there’s more of the same (only different) at christophernosnibor.co.uk