I lost count weeks ago how many times I was asked the question. “Are you doing anything nice for Easter?” people were wanting to know. Family, friends, work colleagues, they were all asking… I hadn’t really given it much thought, but after a half dozen Easter cards from various family members had dropped through the letter box, and I found myself at the checkout queue behind a guy making the most of their three for £10 offer by filling his trolley and bagging 50 quid’s worth, I started to wonder if perhaps I ought to get to thinking. What was everyone else doing?

Days out, egg hunts for the children, generation-spanning family gatherings for roast feasts, couples splashing out on super-sized deluxe confectionery for one another. Clearly, doing nothing was not an option unless I wanted to position the Nosnibor household in that minority bracket of those who exile themselves from society by refusing to participate in any kind of festive activity. In the week and a half before the Good Friday holiday, social networks were aclog with images of fluffy bunnies, cutesy chicks, lambs (all thoughts of slaughter completely dispelled) and people gurgling about their imminent trips away. No, doing nothing was not an option. To do nothing would be to miss out. But on what? And why is Easter such a big deal?

Flick on the news and the BBC New Channel are cutting live to York, where the Archbishop of York, John Sentamu, was busy waterboarding some zealots in the street in front of the Minster. Fair enough, you might say: Easter is after all a Christian festival – arguably the most important. The birth of Christ may be cause for celebration, but it’s the crucifixion and resurrection upon which the religion is built. Why not take the opportunity to reinforce the Christian aspect of the religion’s major festival when it’s under threat of becoming just another excuse to cut loose and enjoy four consecutive days off work (unless you happen to work in retail) by revisiting the Middle Ages? Well, the fact that Easter is another example of the Christian religion superimposing its own calendar over the preexisting pagan calender – specifically the pagan holiday of Ēostre – in order to obliterate the worship of ancient deities and nature is one very good reason.

A picture speaks a thousand words, especially when you can’t speak because you’re drowning in the name of Christ 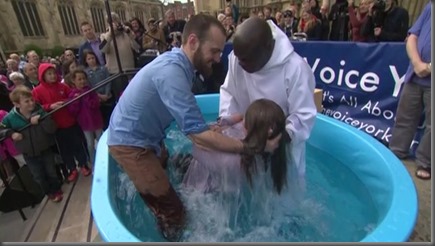 For a full and unbiased report, go to the BBC.

But all of this notwithstanding, what’s curious is the massive upsurge in the popularity and commercialisation of Easter in recent years. Could it really be that the economic downturn that began around 2008 prompted a bunch of cynical marketing companies representing big-money commerce decided the best way to boost revenue was to promote Easter-themed products in order to spur a cash-strapped society to part with their limited disposable income on things they neither needed nor wanted? And, on seeing a bandwagon rolling, the rest of the business world decided it hop on board for fear of being left behind? Well, quite probably.

Could it equally be the case that, depressed by the general shitness of life and working conditions – for those fortunate enough to still be in employment in the wake of the credit crunch – the majority of the population decided that actually, they were drawn by the mass-marketed idea of a celebration that happened to coincide with the slow emergence from a dismal winter marked by long, dark days, even longer, darker nights, destitution and flooding, and thought the antidote to their malaise could be to indulge in a colossal bout of retail therapy? Quite probably.

Multicoloured fluffy chicks: what’s not to love about Easter?

The celebration of spring is noble and something I’m keen to get behind. The springing of new life, the longer, warmer says, the buds, the blossom. It’s truly profound, remarkable, something far greater than human comprehension or existence. And far beyond the great capitalist con. Since when did spending money you don’t have on shit you didn’t need to make yourself feel better enter any kind of spiritual equation? Is this what life’s about now? And yes, that’s a rhetorical question.