I spend a significant amount of time writing about music. So much so that recently, my literary work has taken very much a back-seat position on account of my reviewing work. What can I say? I’m drowning in CDs, downloads and streams, and I hate turning things down, especially free gigs.

Tonight was about taking a night off. I could use one. Recently, I’ve been working beyond fatigue. But sleep’s for wimps and eating’s cheating and who needs drugs when you’ve got sleep deprivation? Anyway. Not only am I a huge fan of Viewer, but I’ve also known front man AB Johnson, who I was proud to feature in the last Clinical, Brutal anthology I edited, for some 21 years now. The fact they were set to play alongside a cracking collection of artists I also know and admire in varying capacities, at a pay-what-you like event at a venue I’ve been meaning to check out for a while made it a night I knew I really ought not to miss.

And yes, about the venue: The Fleeting Arms, as the name suggests, is a pop-up pub, a venture whereby a collective have taken on a former venue on a short-term lease with a view to making it available for all things arts and more. It epitomises boho chic, not out of some hipster fetish for retro and artisan, but out of necessity, and the assorted freecycle furniture, coupled with the various old-school consoles situated in the bar (MarioKart on the N64, anyone?) is integral to the easy-going, community spirit of the place. It feels welcoming on arrival, and the fact it isn’t Wetherspoons or in any way designer and more resembles someone’s living room is perhaps the reason why. It’s also pretty busy by the time I arrive shortly after 8pm, just as Sherbert Flies launch into their lively set.

If writing about their ‘slacker’ style and suggesting they’re heavily influenced by Pavement smacks of lazy journalism, so be it. I was supposed to be taking a night off after all. But their casual demeanour (at one point singer Elliot Barker announced that they’d probably be releasing a track as a single tomorrow, adding, “If anyone wants to hear it, I’ve got it on my iPhone”) and wonky riffage has a definite charm, and made for a thoroughly enjoyable set.

The Wharf Street Galaxy Band are something of a supergroup, comprising members of Neuschlafen / Orlando Ferguson and Legion of Swine / Inhuman Resources. Donning some bad shirts and wielding an array of shakers, wooden blocks and a cowbell they crank out some repetitive grooves and shards of dissonant guitar noise by way of a backdrop to Dave Proctor’s off-kilter ramblings about puffins and selfie sticks. I could write at length about their semi-improvised avant-garde performance style or highlight the all-to-obvious similarities to The Fall circa 1979, but instead, the 7-song setlist that found its way into my hands after the set is likely to be just as illuminating and more amusing. It also reads like a piece of abstract poetry in itself: ‘Shoreditch / Puffins / We Can Help / Sergio / Walking / Selfie / Bellends’.

While I’ve seen Muttley solo a few times, this is only the first or second time I’ve seen the full Muttley Crew lineup, and it’s immediately clear that they’re a band who understand that less is more. The songs are built around simple, repetitive three-chord repetitions, at which they bludgeon away for six, seven, eight minutes, building layers of sound into hypnotic swirls overlayed with squalling noise. But it’s all about the rhythm section: bass and drums are impressively tight and forge an instinctive groove, and their drummer is my new hero. You want motoric, mechanised and metronomic? You got it. There’s nothing flamboyant or fancy about his style, no big fills or flourishes. Instead, he plays like a machine, plugging away at a relentless rhythm and holding the maelstrom of guitars together perfectly.

Viewer are all about a different kind of groove: thumping techno provides the backdrop to Johnson’s sneering monotone in which he couches acerbic socio-political comment. With the visuals playing up, Tim Wright is rather more active on stage than usual, although you couldn’t go so far as to describe him as twitchy. On this outing, the songs seem to have been tweaked, giving a more stripped back and direct sound that inches toward Factory Floor territory at times. The last track of their set, which I didn’t catch the name of, was dark and pounding, and accompanied by grainy images of riots and Anonymous masks, hinting more toward the likes of Cabaret Voltaire and Test Department. Like the other acts on the bill, they sounded great, and Johnson’s reversible bodywarmer is something special. 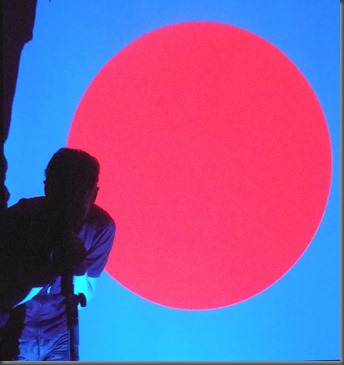 There’s a lot to be said for simple rectangular spaces when it comes to sound, and in keeping with the Fleeting Arms ethos, this event was very much about people coming together and doing stuff, no budget, no agenda other than being creative and getting it out there.

The fact there were so many people present I knew only made it all the better on a personal level, but there’s a broader resonance to emerge from this microcosmic experience. It shows that we don’t need to smash capitalism, and while Cameron’s post-Thatcher is capitalism seems intent on crushing the country’s collective spirit (not to mention its pub trade and heritage), after the music industry as we knew it already succeeded in facilitating its own demise, there are people doing what they do for the right reasons, and there are people who appreciate it and will happily support it. It’s not about money. It’s about art, and community. This is exactly what we need right now.